After not getting out for hikes for a while, between holiday preparations and weather and a three day power outage and clean-up thereof, there was a nice (for December) day coming up. We had been thinking our next outing would be to the Meadowbrook Forest, a massive property managed by the Blue Hill Heritage Trust that stretches from rt. 172 in Surry up to rt. 1 in Ellsworth. (It doesn't show up on Google maps, by the way.) But the days are so short and those trails are so long, so we decided to visit Newbury Neck, a part of Surry we had never been to.

Newbury Neck is a long peninsula reaching down between the Blue Hill Peninsula and the Trenton peninsula and Mount Desert Island, with Morgan Bay on the west side and Union River Bay on the east. After a much-needed stop at the transfer station, we continued on rt. 172 and turned right onto Newbury Neck Road. There are various places where you can catch glimpses of Union River Bay, especially with winter-bare trees.  The map showed some public features on the shore, but we didn't see how you were supposed to access them. We'll have to ask around to find out which private roads allow right-of-way to them.

We drove by the public Newbury Neck Beach, but didn't stop as they were doing construction, probably repairs from storm damage to the seawall between the beach and the road.  We drove all the way to where the road became private property, posted "no trespassing". If you want to go all the way to the end, you'll need to make friends with whoever lives there. So we turned around and headed back north, keeping an eye out for the Blue Hill Heritage trust sign we thought we glimpsed on the way down.

And there it was! There was a spot with room for one, or maybe two cars and a path leading across a large field to the shore. According to the sign, this is not a "preserve" but a "conservation easement" granted "through the generosity of Laurie A. Rokakis & Christina L. Shafer" for day, foot use only. Well, it was day and we had feet, so we took off to the shore. The path is very smooth as it goes down a slight decline. The field had had a fall mowing and seemed to be a mix of hay and low-bush blueberry. 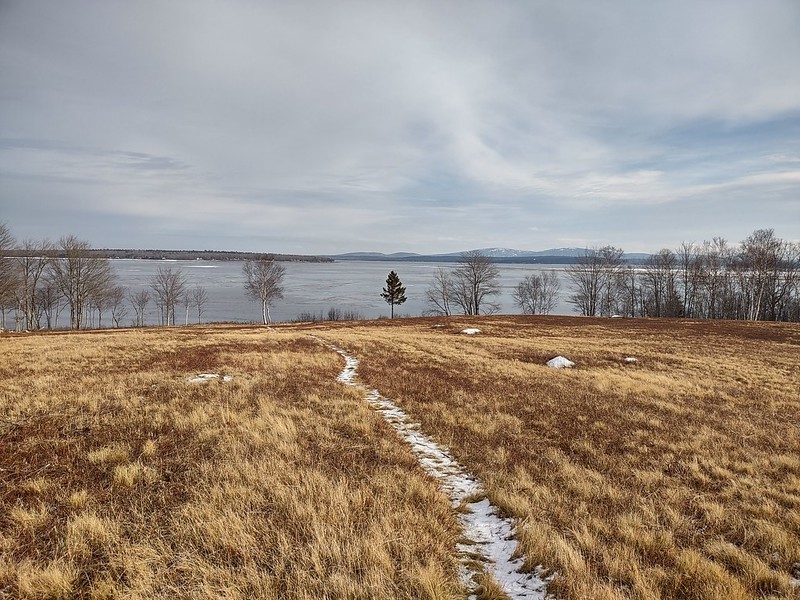 A path with a thin covering of snow winds downhill through the short tan grasses and reddish brown blueberry bushes ,with a view across Union River Bay to the Trenton peninsula and Bartlett Island, with the mountains of Acadia National Park on Mount Desert Island rising behind them.


When you get to the end, you are perched over 10 feet above the rocky shore with no reasonable route for the rest of the way down; this access is for the gorgeous view across Union River Bay to Trenton, Mount Desert Island, and Bartlett Island. The shore was strewn with chunks of ice, and floes of ice floated with the tide, despite the warmish weather since the deep freeze. We strolled back up to the car and continued north. 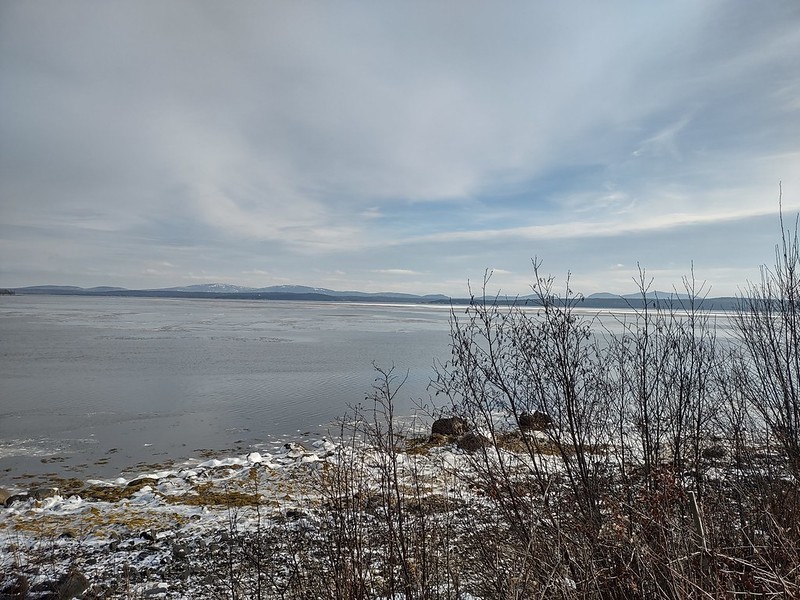 Union River Bay and the rocks and seaweed on the shore coated with ice and a thin coating of snow. The surface of the water has thin sheets and chunks of ice floating on top. The sky is overcast but bright. 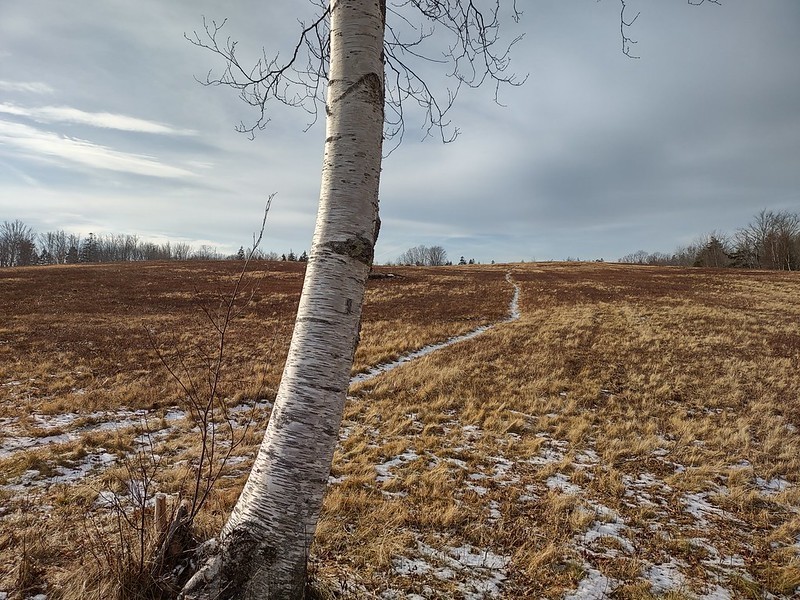 The white trunk of a  birch tree slashes upward in front of the path leading back up the hill to the parking area.


When we passed the Newbury Neck Beach again, it looked like they had finished back-filling the breakwater, and a carload of people were bounding around on the beach, poking at the ice and peering into tidal pools. The tide was pretty high leaving not so much room on the beach, so we continued to Cross Road where we would find the parking area for the Furth Wildlife Sanctuary and Talalay Nature Sanctuary, on one side of the road, and the Carter Nature Preserve on the other. Our plan was to do both loops, but the days are shorter than you might think, so we left Furth/Talalay for another day. 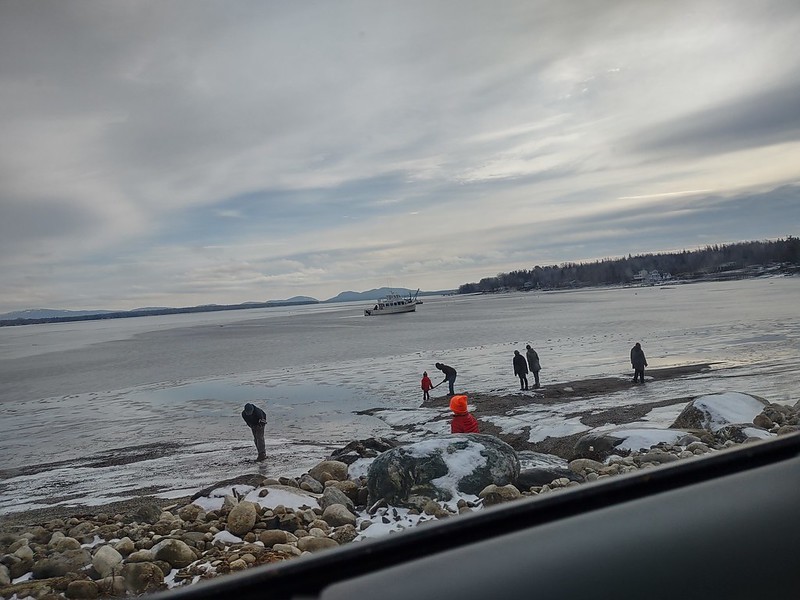 Driving by Newbury Neck Beach, with visitors on the shore, lobster boats anchored in the bay, and the mountains of Acadia in the distance.


The Carter Nature Preserve itself is on the shore of Morgan Bay, but there is a pretty lengthy easement trail to get to it. The first part is an easy-to-moderate trail through woods, and then a long stretch of wide, hard packed easy trail, sprinkled with eight or so very nice benches. One of them had a water bowl for dogs, bring your own water. The trail had a thin covering of busily melting snow, so I was glad for both my walking stick and my waterproof boots. It was lined with mostly young firs and the forests on either side were generously covered with mosses and lichens. There are a few spots as it goes up and then down a hill where it's a bit more difficult, but they were installing steps on the hardest part. 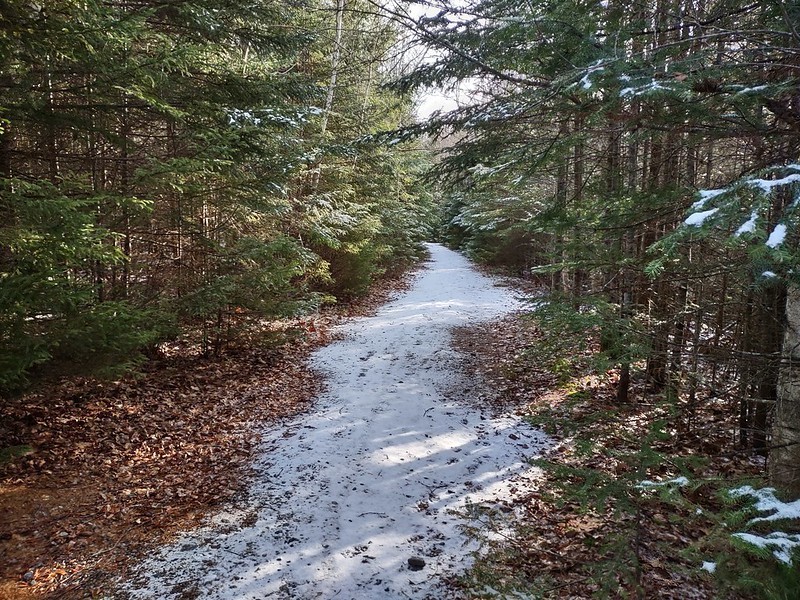 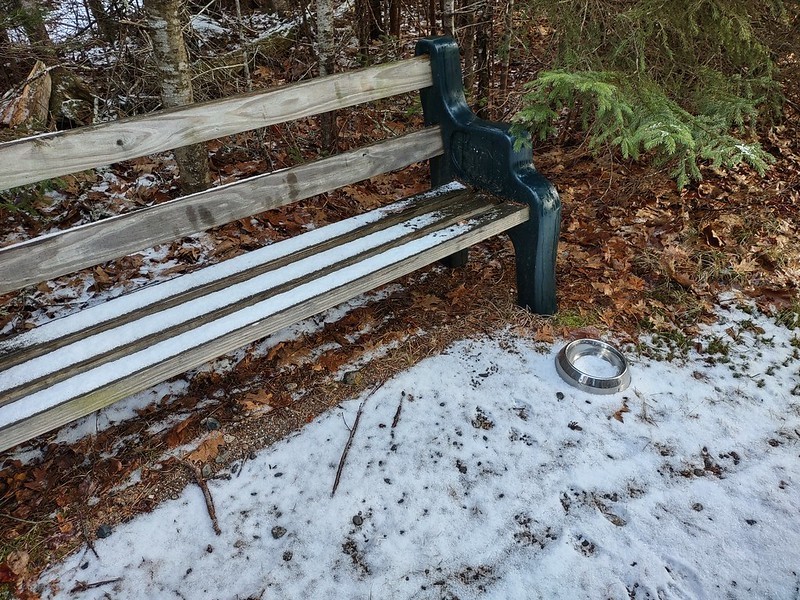 A water dish for dogs placed at the end of a fancy bench next to a snowy trail.


As we approached the Preserve itself, we started encountering spots where the storm had knocked over trees across the trail.  The most difficult was a pair of trees that left only about of foot of clearance under them and no easy way over them, just before the sturdy bridge over a stream that empties out into Morgan Bay. Most were very easy to step right over. We made a note that we should drop a line to the Trust in case it wasn't already on their trail repair list. 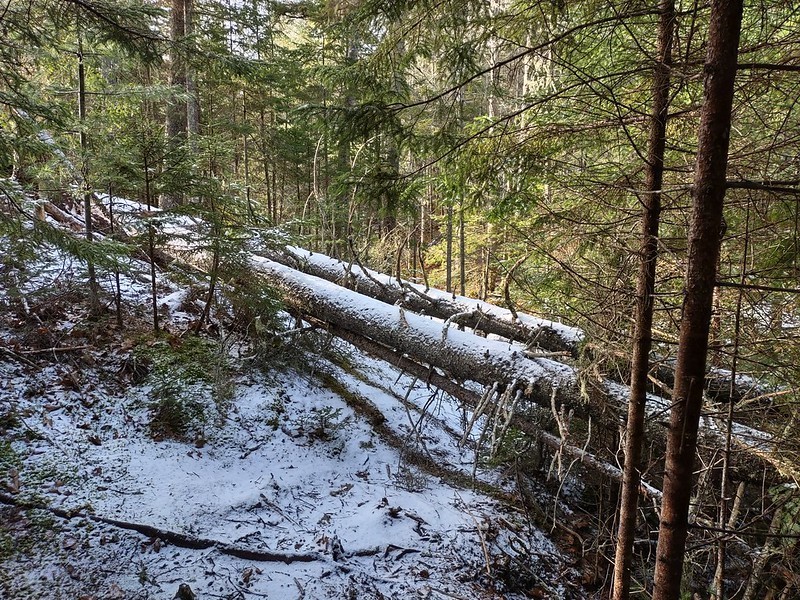 A pair of tall trees that have fallen directly across the path, lightly dusted with snow. 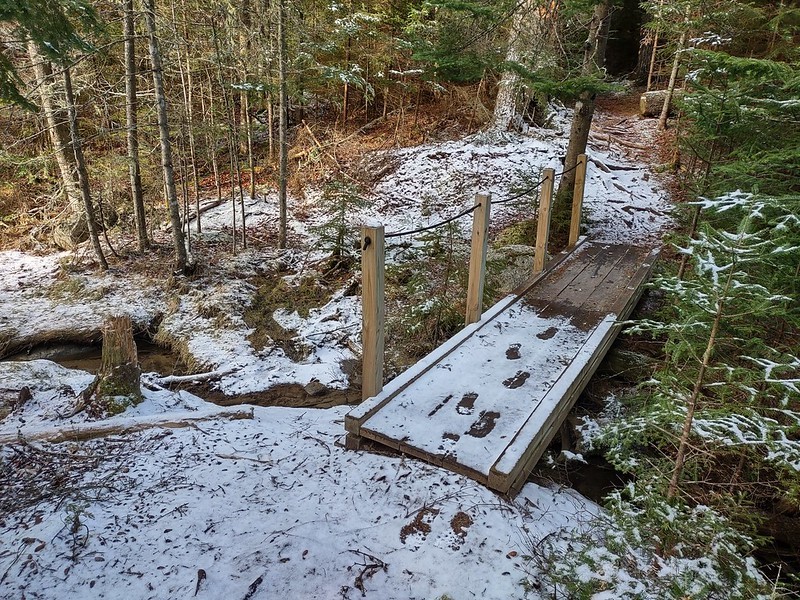 A flat wooden bridge with a rope handrail that crosses a small stream. There's a single set of footprints in the snow coming across the bridge the other way.


The Preserve is a sweet property with a fairly easy trail that winds through dense woods. Some of the biggest trees were obviously long-dead, but still providing habitat for birds, squirrels, lichens, fungi, and mosses. There weren't many birds to be seen - a Chickadee here and there - but it must be a happening place during the summer breeding season. 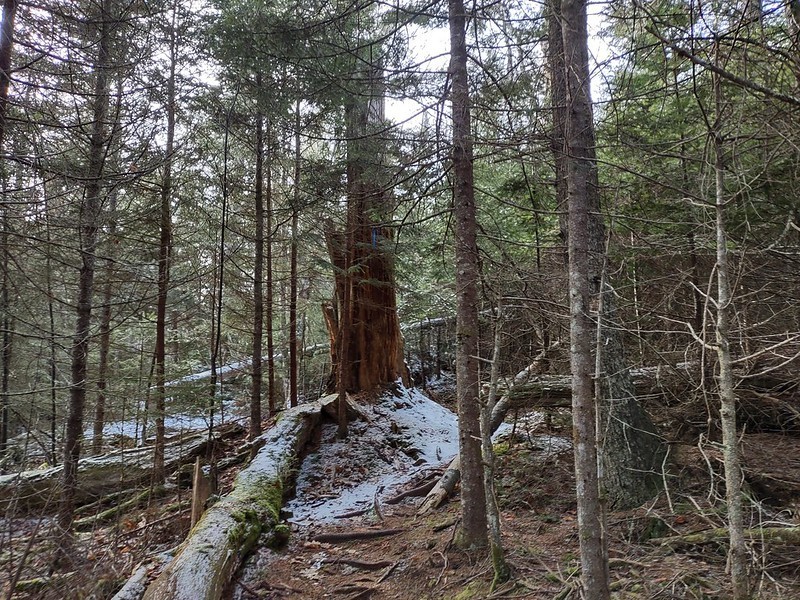 The tall, thick stump of what must have been a massive tree rises in a cone from the leaf litter of the forest floor, surrounded by huge old fallen branches and young firs.


At one point, the trail takes you down to and along the rocky shore.  The beach was largely covered by ice and snow and there were lots of small ice floes floating on the water. It has lovely views across Morgan Bay. The low winter sun tinted some of the elaborate clouds pink, and they were reflected in the water and ice. The trail then turns up a rustic stone stairway and past a field to Cross Road, where there's a second parking area which probably holds about two cars. Instead of backtracking along the entire trail, we walked the pretty short distance up Cross Road to where we had left our car. 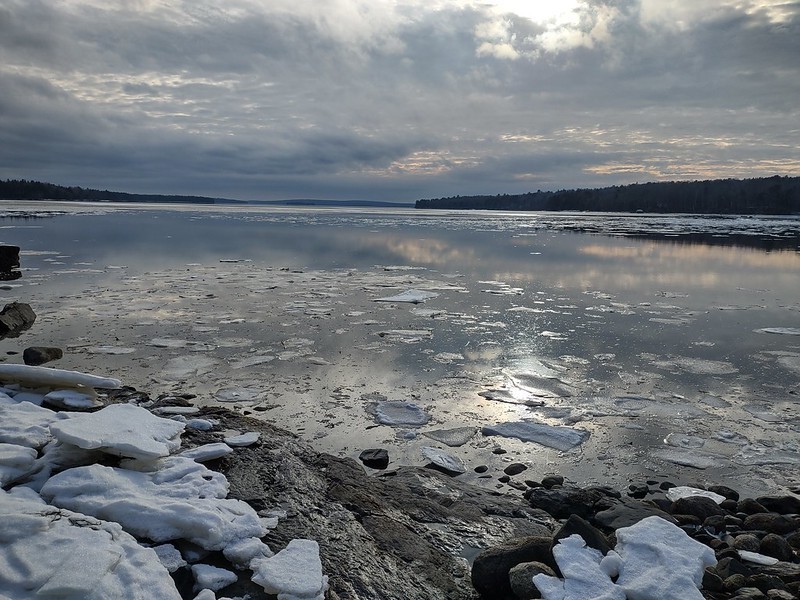 Morgan Bay with the mostly cloudy sky reflected on the still surface, dotted with chunks of ice. Chunks of snow-covered ice are strewn about on the rocky ledge of the shore. 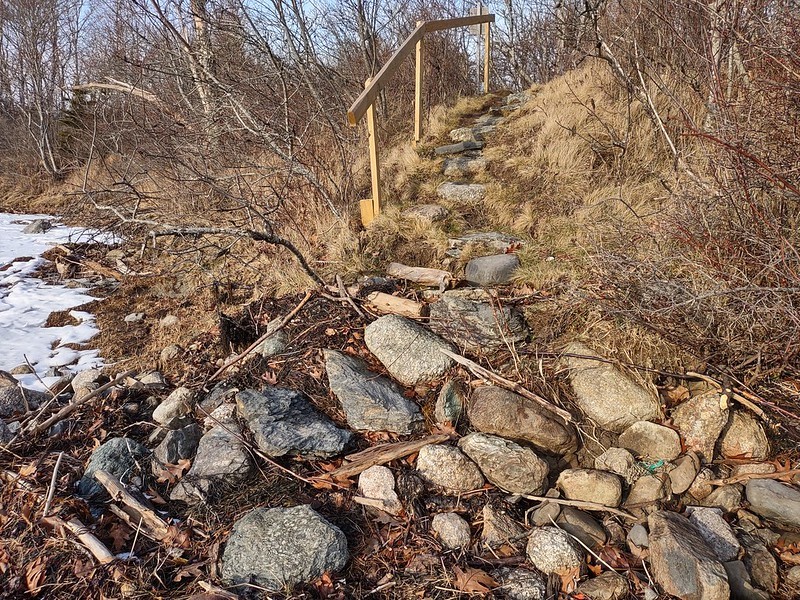 The jumbled rocks on the shore pile up and morph into a staircase up the bank, with a functional if not elegant handrail.


From there, we proceeded on to Ellsworth, had another fine although late lunch at the Airline Brewing Company, then returned by way of the grocery store.  All in all, a very good day: two errands, two fun visits, and home before dark.