The forecast called for another September-like day in the middle of November, so it seemed like a good day to bring lunch and get an early start so we could go for walks in two places. We picked two properties managed by the Frenchman Bay Conservancy - our first of theirs - one inland and one on the coast.

The first thing you do when you go to a new place is find out how the locals say it so you don't embarrass yourself. It's pronounced mar-EYE-ah-vill (like "the wind calls Mariah".) But then we didn't run into a single person and didn't get to show off our lack of ignorance. But that meant we had this lovely property all to ourselves!

This is a fairly large chuck of land along the West Branch of the Union River, upstream from the massive Graham Lake, but the only trails are down by the river. From the nice parking area at the end of a gravel road, the trail follows the top of a ridge forested in birch, pine, cedar, and oak. 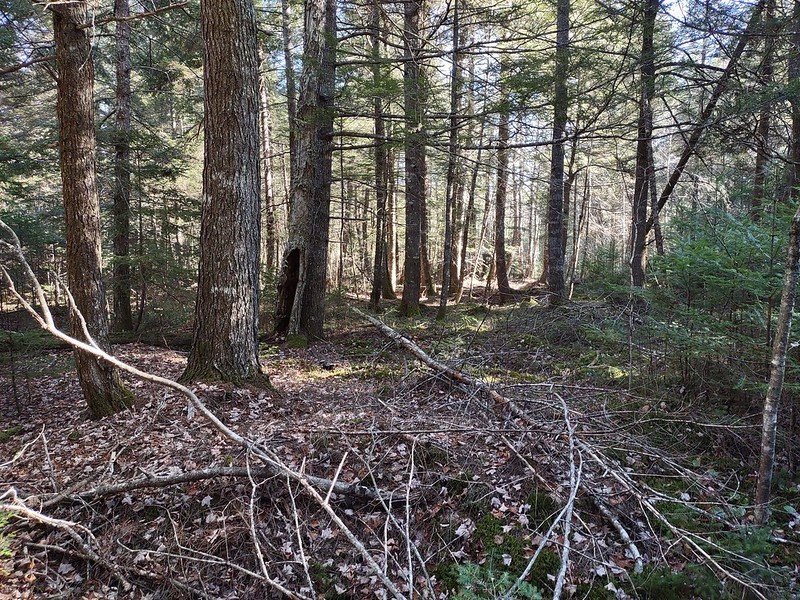 A shady grove of tall White Pines with a sunlit clearing in the distance.

The "unimproved" trail is quite easy, but there are a number of places that looked like they would be dicey in wet weather, and some did have plank bridges across the worst places. At the end of the ridge, there is a winding trail down to the river shore. Somebody had obviously cleared the slippery fallen leaves from the steepest parts, so that was nice! 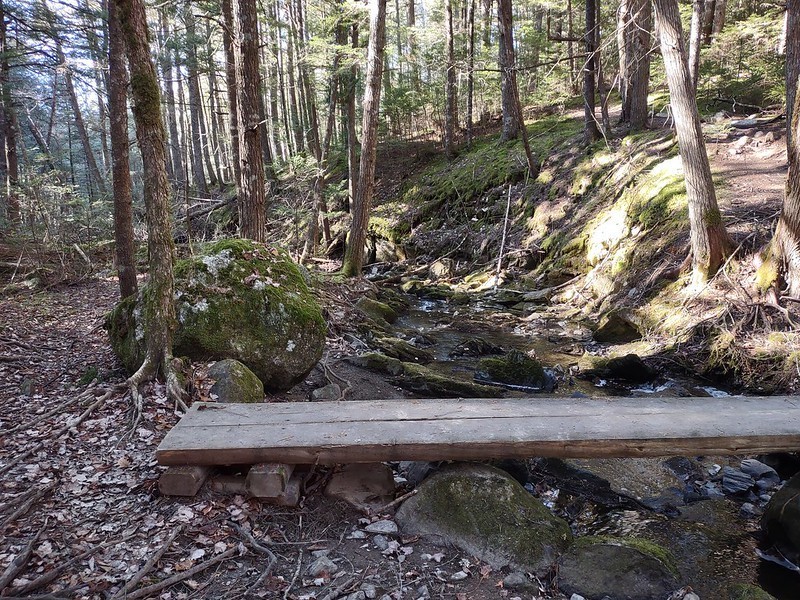 The trail winding down the ridge where a plank bridge crosses a stream.

At the bottom, you turn right to follow the spur trail upstream along the sedate Union River. Sedate, that is until you hit the bottom of the stretch of falls, when it turns out it's pretty feisty. There are a series of falls every 10 or 20 feet, each getting a bit taller. The rock here is not the smooth granite of the shore, but a layered rock that reminded us of the rocks lining Lake Cayuga in Ithaca, N.Y. At the highest point of this part of the trail is a nice bench with a great view of the biggest falls in the series. While this is touted as an extremely clean stream, the water was markedly tea-brown, no doubt from all the fallen leaves steeping in it. 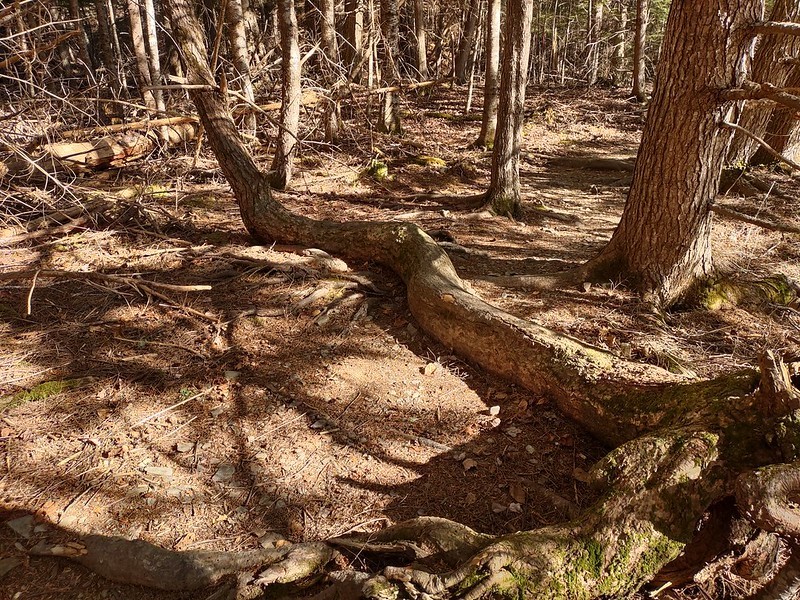 This tree may have fallen over, but it didn't give up: it just tried again across the path. 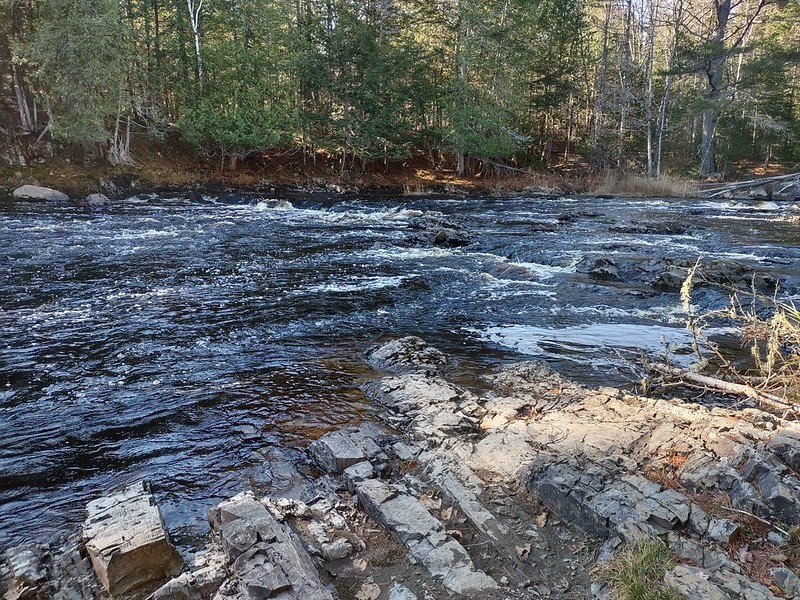 The first set of falls and the characteristic flat rocks the river runs through. 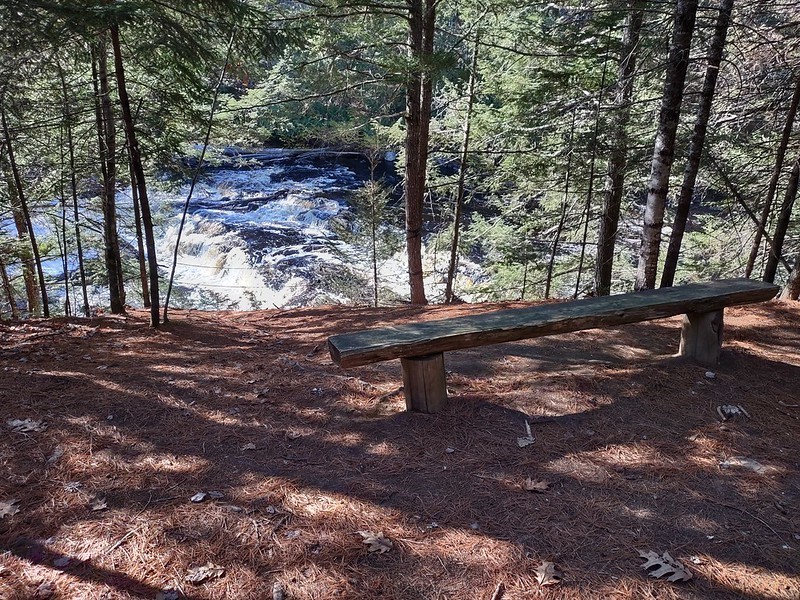 The bench at the head of the falls. Note the strands of rope between two trees: they probably wouldn't stop you from falling into the falls, so more of a suggestion to not go there.

From there the trail continues to a bend in the river, where it once again looks serene. The roar of the water from around the bend would probably tip you off that the next stretch was not navigable, but they also have a sign posted. 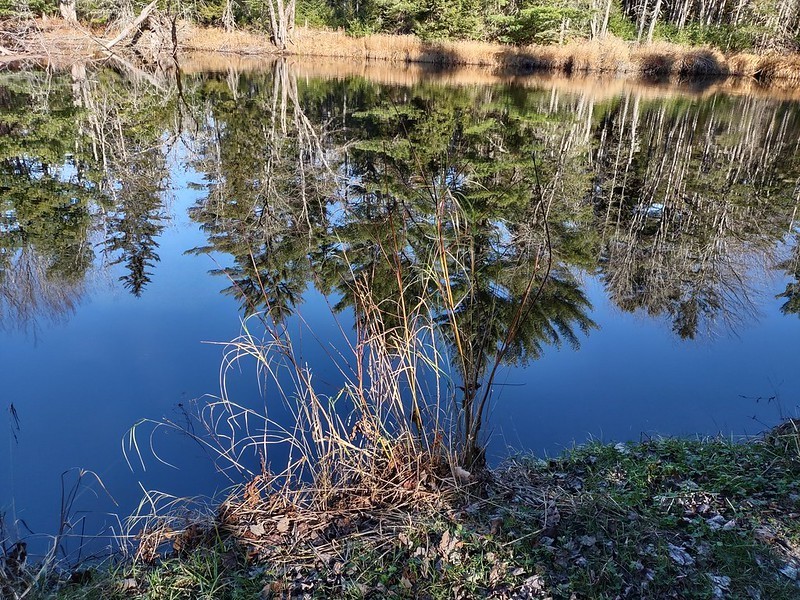 The glass-like surface of the Union River upstream from the falls reflecting the trees on the other shore.

We then backtracked on the spur and completed the riverside part of the loop and the spur that goes to the preserve's boundary. Some of this part is wide and smooth - probably enough for wheelchairs or baby strollers, although the path back up to the second parking might be a little steep. 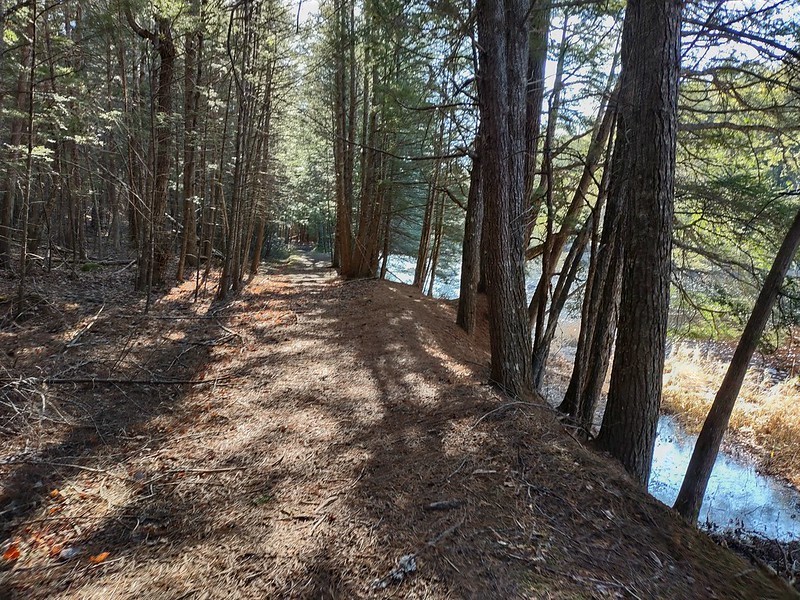 Wide smooth trail through trees along the banks of the Union River. 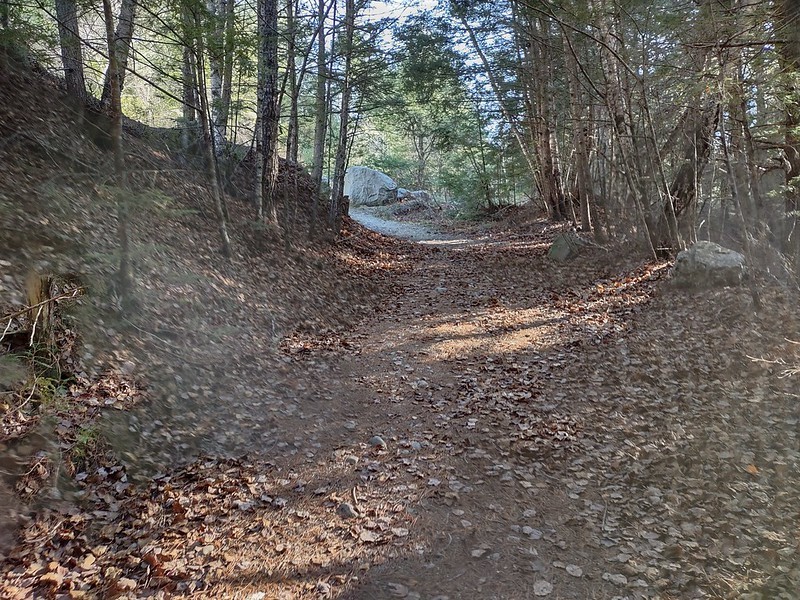 Trail up to the second parking area. A few large boulders are positioned at the top to discourage vehicular traffic.

We followed the road from the second parking area to where our car was and enjoyed some nice sandwiches. We then hopped in the car and headed to Gouldsboro on the coast.

The Taft Point Preserve has two loop trails from the parking area. There were two other cars in the parking lot when we arrived, but only one when we finished the Flanders Bay trail and then only ours when we finished the Jones Cove loop. It felt like we had the place to ourselves, though, since we didn't see or hear the other visitors. One of the features of this preserve is an interesting intertidal zone, but the tide was high when we were there, so we'll have to save that for another visit.

The brochure mentions that there is well on the Flanders Bay trail, but we actually saw two: one round and one square, both with fences around them to keep folks from falling in. Maybe the square one was a foundation for something rather than a well? 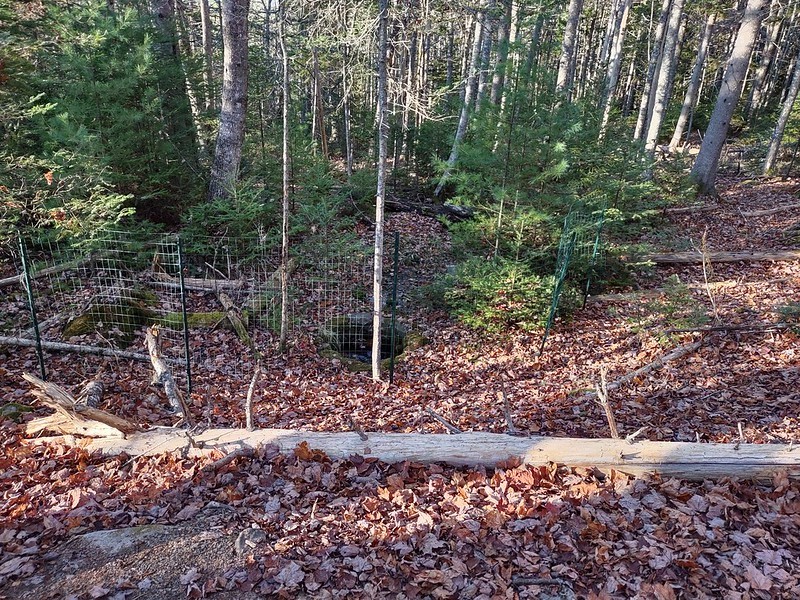 Downhill from the trail, a small round stone well is trying to hide amongst the fallen leaves 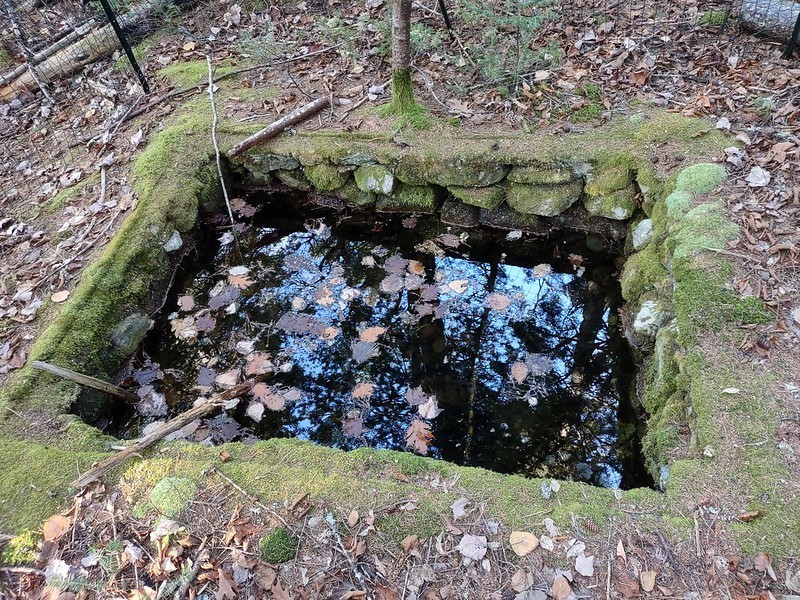 A square hole in the ground lined with mossy rocks. A scattering of brown leaves float on the surface, which is reflecting the sky and tree branches above.

We came across an amazing tree, completely covered in burls. It had obviously been a while since it had put out new leaves, but it was still standing proud and beautiful, so I hesitate to call it dead. 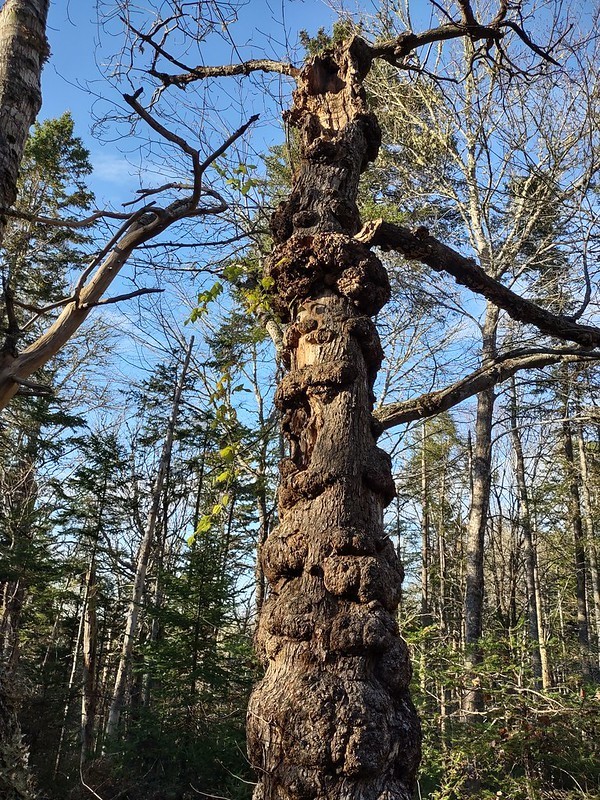 A burly tree reaching its top two branches out as if to hug the sky.

The trail winds down through spruce and oak to the shore. There are a few places with two-plank boardwalks across areas that must get wet, but they were bone dry on our walk. The trail follows the shore for a while until you come to a beautiful bridge over a small ravine, featuring a lovely bench so you can sit and admire the ocean. There are amazing views of the mountains at Acadia National Park. No pictures though - the sun was too low and shining right into the camera. You'll just have to go and see for yourself. Shortly after there's a sturdy set of stairs down to a pebbly beach. 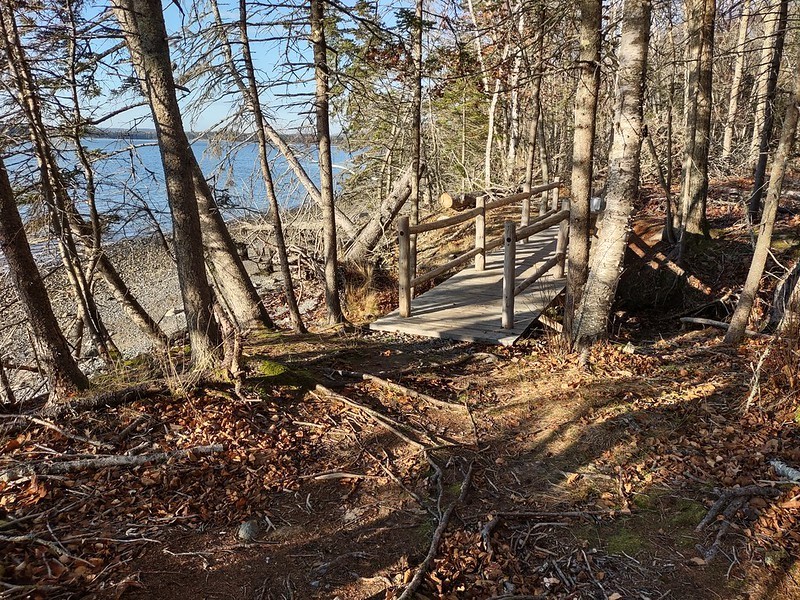 A wooden bridge with hefty handrails with the ocean in the background. 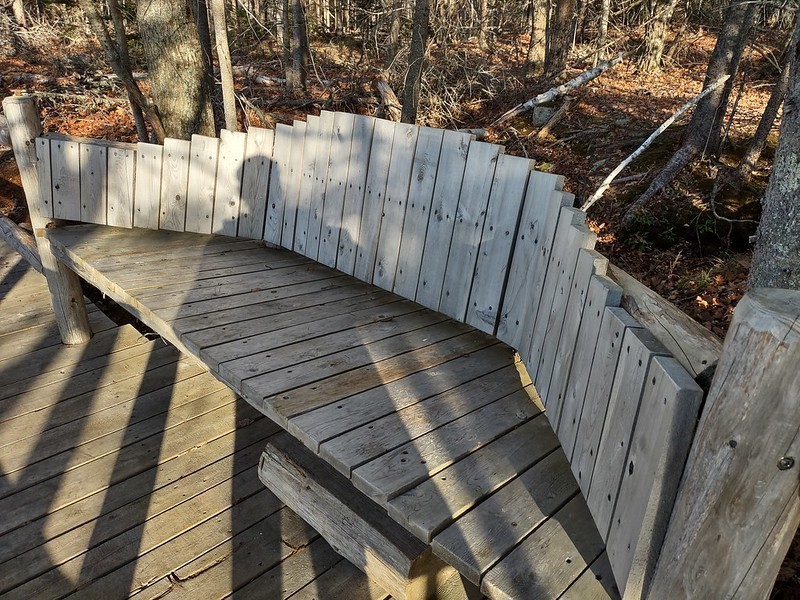 A bench built in the middle of a bridge. Its back bows out so its very deep in the middle. The back slats get taller in the middle, and there's a block of wood underneath you can pull out it if the seat is too high for you. 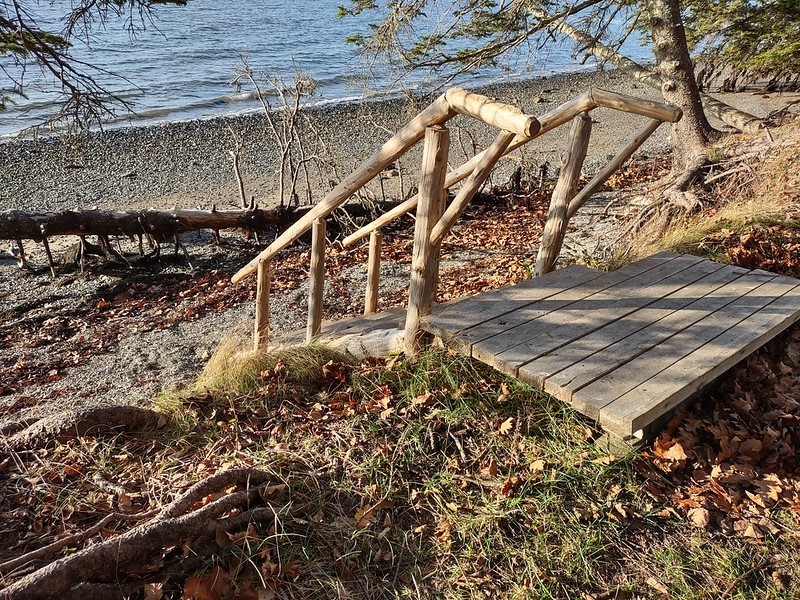 Sturdy stairs down to the beach.

We didn't linger long on the beach, but headed back up through the woods to the parking area so we'd have enough time to do the Jones Cove loop. This trail included numbered signposts for a self-guided nature walk. There was a set of laminated cards hanging at the welcome signpost at the parking lot that you could borrow as well as QR codes on each of the posts. On shore part of the trail, there was a tantalizing glimpse of a fan-shaped sandy beach, but the trail turned back up before getting there. Access must be from the adjacent private land. 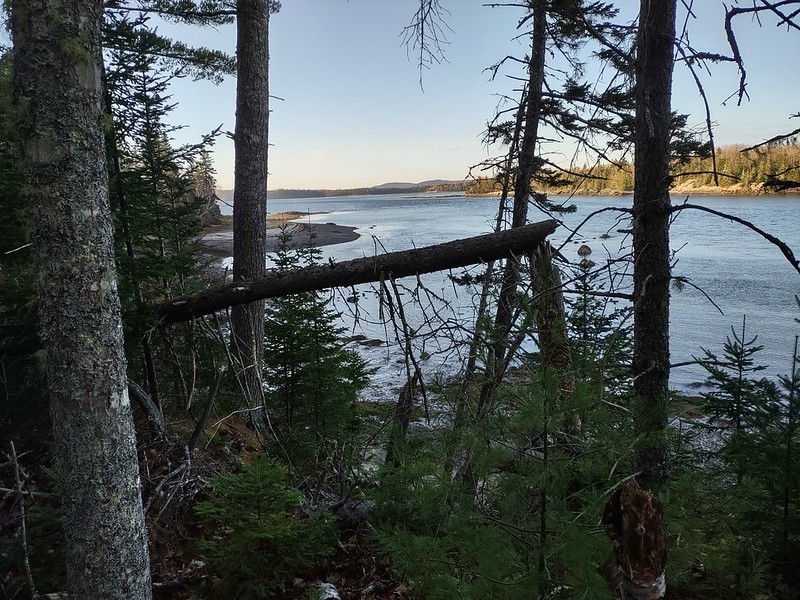 Looking through trees to a sandy beach a bit down the shore.

This loop passed by several moss and lichen covered boulders, some sporting some small ferns, always a high point of any trek. 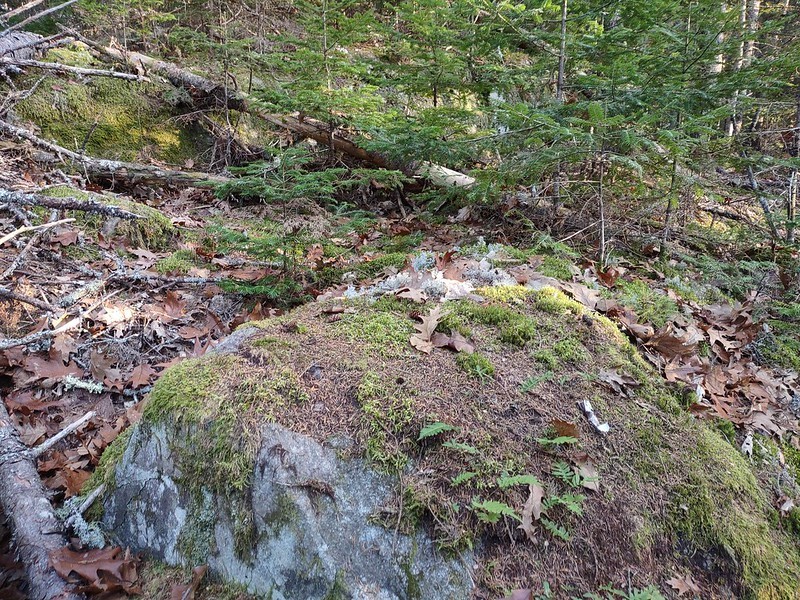 A large rock in the woods covered with moss, lichens, some fallen leaves, and a few small ferns.

All in all, this a delightful small preserve with easy trails and lovely views. We'll have to go back when the sun is higher in the sky and the tide is out.