I was dutifully reading the legal agreements on a website, which were popped open in a new window. Can you tell me what's wrong with this picture? 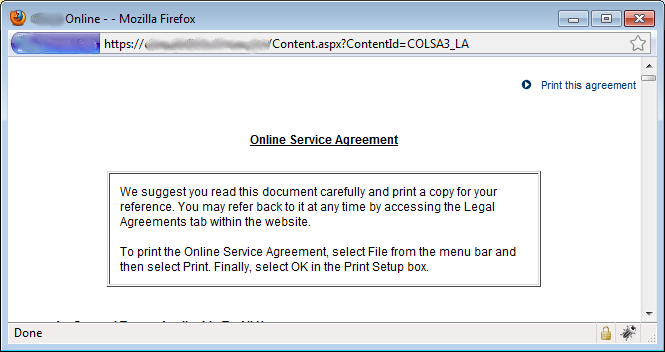 Yes, they've told me to go to my browser's menu bar, but the new window they made didn't come with one.

They did provide a link to print the document, but what I wanted to do was save a copy. Fortunately, I knew the keyboard shortcut "ctrl-s" for "Save page as…".

You just never know when those keyboard shortcuts will come in handy!

A short video where Jon explains and demonstrates our hop harvesting method.

Fully instructed, the crew gets snipping. 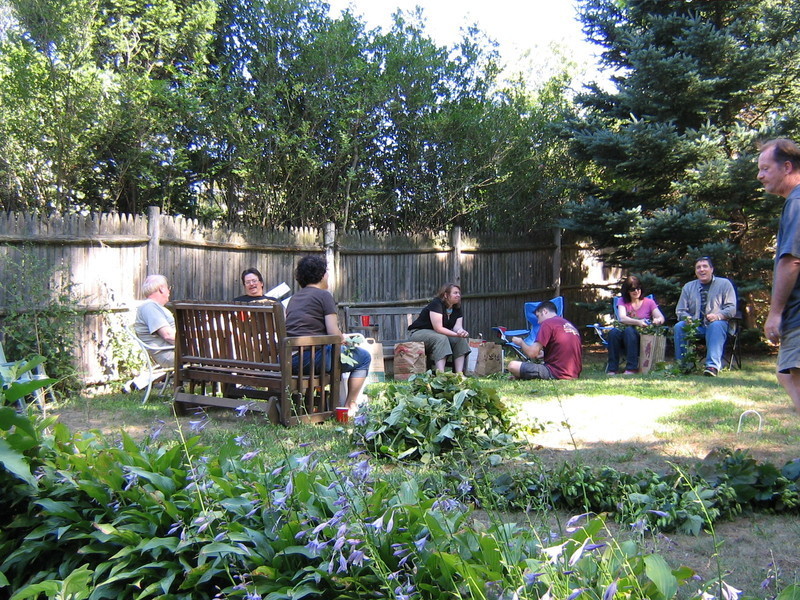 The hops all snipped off, all that is left is a pile of hop bines, and paper grocery bags filled with hops 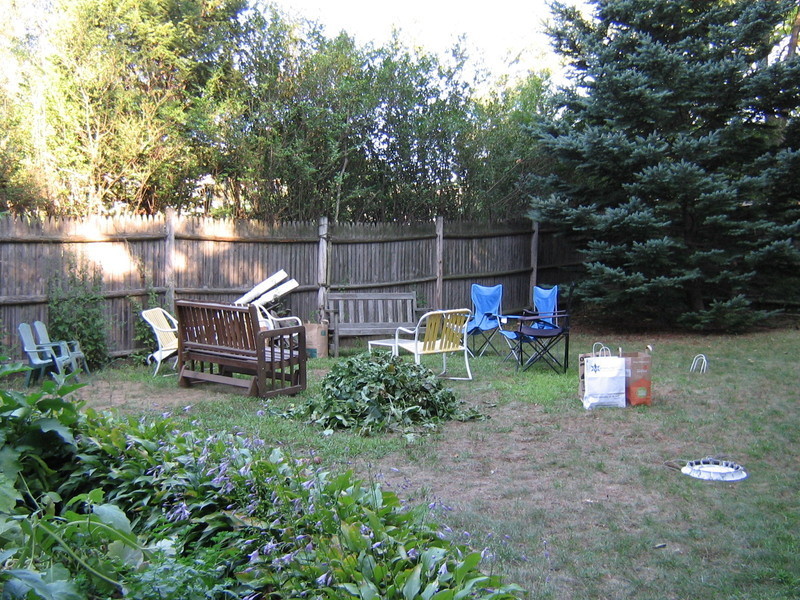 A short video trying to convey the size of our hops plants this year. Hops die down to the roots each year. They are a "bine" - using the winding of the stems to climb - as opposed to a "vine", which uses tendrils to grasp.

We rig a flag pole augmented by two-by-fours, from which a line is strung to a hub cap, and from there to a third floor window. From this horizontal line and the spokes of the hub cap, we dangle twine down from the bines to climb up. On the ground, we have three tripods made of coated steel rods. The bines climb up these (and each other) until they reach the dangling strings.

Hops are the flower of the plant. They look like pale green pine cones, but are soft. Under the scales are little sacs of yellow stuff. This is the source of the bitterness that adds flavor to beer, and it also acts as a natural preservative. When harvesting, you have to be careful not to break the sacs.

When Jon brews, he usually uses purchased hops for the wort, and uses our harvest for dry-hopping his Astral Ale, an India Pale Ale (IPA.) That could change if we get a bigger harvest!

Update August 18th: Here's a short piece from Jon this Spring about rigging the trellis, including a picture of the hop plants when they were only a foot or two tall.

I love being in Maine pretty much any time of the year, but right now (being July!) July is my favorite month. This video was taken on the Blue Hill Peninsula of Penobscot Bay, and features a ruffled orange day lily, lush bushes and Red Oak trees, and the beautiful call of a Hermit Thrush in the background.

A phoebe family calls our porch it's home in the early Summer. Mom and Dad catch bugs, then swoop about from perch to perch to confuse predators before finally arriving at the nest. Their arrival is greeted with loud peeping immediately followed by silence as the adult flies away. I took this picture of the two little ones in their mud and grass nest nestled into the eaves two days before they fledged. The porch was suddenly lonely without their comings and goings. 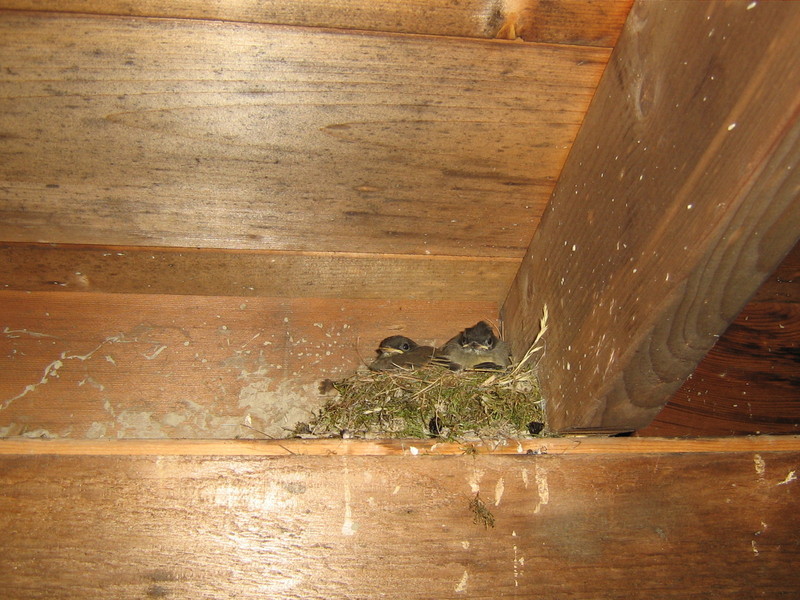 YouTube recently introduced automatic captioning for its videos. "O frabjous day! Callooh! Callay!" said people* I work with who are faced with the time-consuming and tricky task of creating transcripts for videos. Having seen some very … odd … output from high-end, state-of-the-art, speech recognition software, I suggested they wait to see for themselves before getting too excited.

I could easily make this a "bloopers" post, but it's almost too easy. Did you see the one where Massachusetts Secretary of Education Paul Reville says, "what the application does" but the automatic captioning is, "for the prostitutes"? That particular video is transcribed so poorly that it's not clear that it would save any time to edit their transcript file over doing it yourself.

But I think a better measurement of accuracy is looking at how a particular word or phrase is transcribed in the same video. Let's take a look at Mark Roth giving a TEDTalk, Suspended animation is within our grasp where he uses the phrase "hydrogen sulfide" fifteen times. It's correctly transcribed five times, including the first time he says it. The rest are pretty far off, and give you no idea what he's talking about. This is a problem - it's a key fact in his presentation.

The take-away is clear. If you care about accuracy, if you want people to be able to understand what is actually being said, do not rely solely on automatic captioning.

* No, they didn't really say that. That's from Lewis Carroll's poem, The Jaberwocky. I wonder what YouTube would make of that? 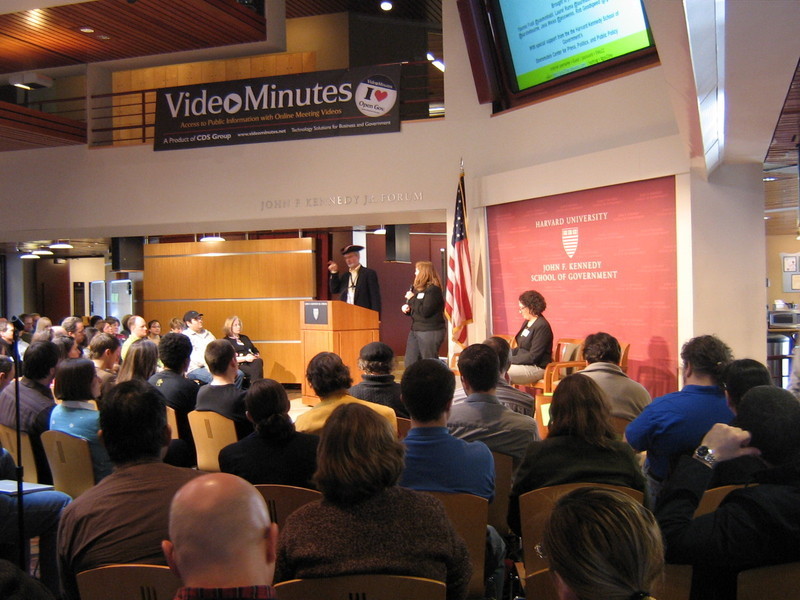 This is a great video showcasing some of the things Yahoo is doing to educate their developers about accessibility.

Testing to make sure software the Commonwealth buys or creates can be used by people is a big part of my job these days, and a big part of that is just making people aware that people with disabilities can and do use computers and the Internet.

Yes, blind people can use the web ... unless the website was made in such a way that they can't. And what a shame it is when that happens, because the Internet has made it more possible for people with disabilities to live independent, productive lives.

I originally wrote this little piece in October 2008. I dug it up again today in light of the Supreme Court ruling today. (Supreme Court Issues Major Campaign Finance Decision)  Although many are seeing the ruling as a step backwards for campaign reform, the McCain-Feingold law didn't seem to be all that effective in limiting the influence of corporations. Unchecked and unbalanced In an article in Sunday's Boston Globe ([October 5, 2008] p.A1, A10), David Haskins of Nevada was quoted as saying, "Our founding fathers never envisioned government to be so involved in business." But the inverse is even more true: our founding fathers never envisioned business to be so involved in government. Our huge corporations today have a level of power and influence that in the 1700's was limited to nations. Unlike nations, corporations have no long-terms concerns over sovereign lands or people to balance their pursuit of wealth. This leads to the interesting phenomenon of corporations who spend more on campaign contributions and lobbying than they do in taxes. The money that could be used for our public infrastructure - that they benefit from, too, and perhaps more than most - is used instead to distort the democratic decision making process, and has to be made up by increasing the burden on individual citizens and smaller businesses. The authors of our Constitution created checks and balances within the government and sought to protect us from the power and influence of organized religions, but provided neither checks and balances nor protection from corporations. 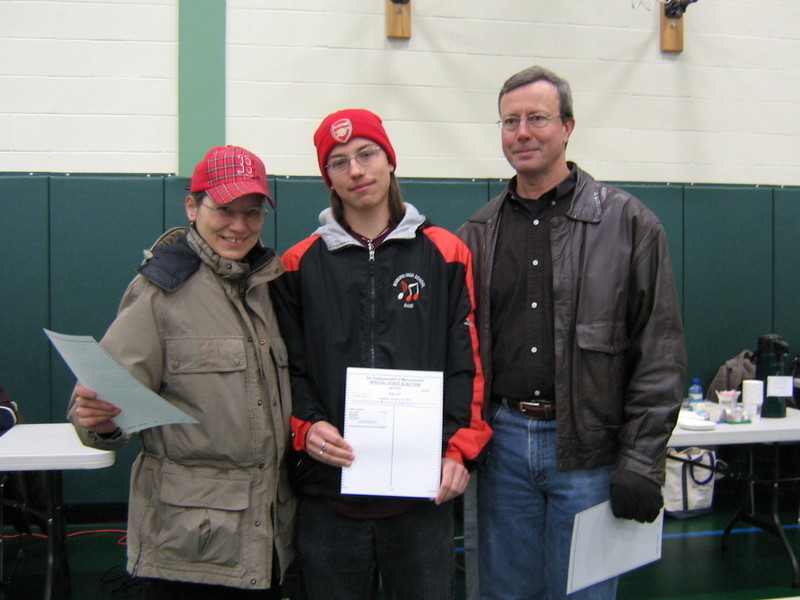 My husband and I have been taking our son with us when we vote since he was an infant. We believe that voting is not only a privilege but a responsibility, and felt that the best way to make sure our son know that was to involve him in the process.

Of course, that process begins before you head to the polls. We discussed issues and positions at home, and encouraged him to take part in those conversations. We talked about what we read in the newspapers. We showed him how to use the web to find out more information.

Today was a proud day for me. This time when we went to the polls with our son, he got a ballot, too.

I forgot to mention how happy it made the poll workers. I asked one of them to take a picture of us. "That's the first time I've ever seen that!" All of them were beaming at us.